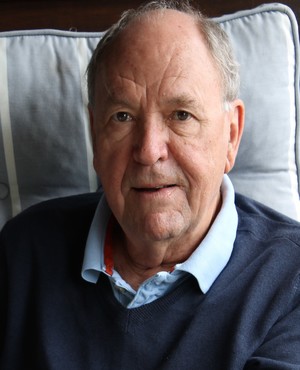 Christopher Hope, a South African novelist and poet, began his literary career as a journalist and poet but is celebrated as a novelist probably best known for his controversial works dealing with racism and politics in South Africa. Christopher has earned a number of prestigious writing awards including the Thomas Pringle Prize and a Cholmondeley Award for Cape Drives (1974), a collection of poetry. His second novel, Kruger’s Alp, considered a stark contrast to his first work, was described by the New York Times as ‘a novel in the form of a dream allegory’. It was greeted with critical acclaim and won the 1984 Whitbread Prize. Other awards include the Professor Alexander Petrie Award, the Silver Pen Award. In 1992 Serenity House was shortlisted for the Man Booker Prize. Christopher was elected a Fellow of the Royal Society of Literature in 1990.

In 2014 he joined forces with his violinist son, Daniel Hope, to write the libretto for A Distant Drum. Commissioned by the Carnegie Hall as a one-off performance this unique production of music-theatre was curated by Daniel to mark twenty years since the end of Apartheid. The highly-acclaimed production tells the story of Nat Ankara, a young writer, a brilliant, irreverent spirit of his generation, who left South Africa for New York in the 1960’s. A Distant Drum played to rave reviews in Bloemfontein and in New York.

In a distinguished career in which he has written twenty-one books (novels, memoirs and collections of short stories) Christopher’s most recently published novel is Jimfish (2015).