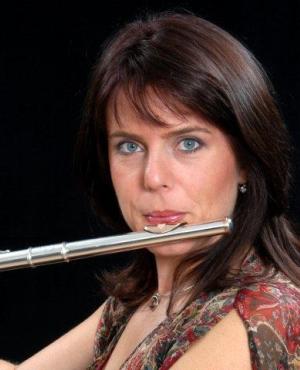 Bridget Rennie Salonen is active as a solo, chamber and principal orchestral flautist and has appeared as soloist with several South African orchestras. Her studies at UCT and abroad equipped her with multiple qualifications and honours. As the former Solo Principal Flute of the Cape Town Philharmonic Orchestra, she was the recipient of the prestigious Ben & Faye Carklin Award for Artistic Excellence.

She is frequently invited to perform with musicians such as James Grace, Albie van Schalkwyk, Zanne Stapelberg, Marian Lewin, Gaylen-Rose Sales, Catherine Foxcroft, Magdalene Minnaar, Jose Dias, Erik Dippenaar and Peter Martens, amongst others. As a member of ‘Trio with a Twist’ with Janine Neethling and Lizzie Rennie, she was the recipient of the Fiesta award for Best Classical Production at festivals in 2012, as well as a Silver Ovation award at the National Arts Festival 2014.

Bridget is active as a freelance flautist, is the principal flute of the Cape Town Pops Orchestra, guest principal with the Free State Symphony Orchestra and plays the Baroque Traverso flute with the Camerata Tinta Barocca. She displays astounding musical versatility in any music genre, whether on stage or in studio. She is equally at home playing in a Symphony Orchestra concert hall as she is featured in “Skouspel” at Sun City’s Superbowl, or playing a concerto in the Kruger National Park at “Baroque in the Bush”. Bridget’s exquisite flute playing has been recorded for numerous soundtracks, such as the shows “Cats” and “Tree Aan”, the movies “Material” and “Faith Like Potatoes” and documentaries like “Ocean Odyssey”.

Bridget lectures at the College of Music at the University of Cape Town. Many of her students have excelled in their overseas studies, and now teach and perform locally, several occupying positions in South African orchestras. As one of South Africa’s leading exponents of the flute, she is frequently invited to act as adjudicator or external examiner. Qualified in Performing Arts Health, Bridget is pursuing PhD research in tertiary level musicians’ performance health education.