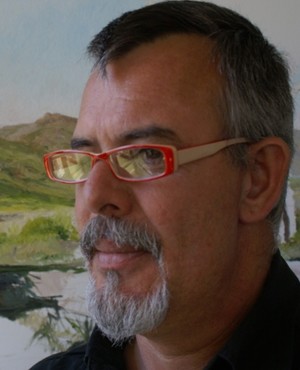 Born on 13 September 1962 in Windhoek, Namibia, Brahm van Zyl went on to Matriculate in 1980 at Overkruin High school, Pretoria, South Africa. He then studied BA Fine Arts at the University of Pretoria, under the tutorship of Prof. Nico Roos.

Brahm has exhibited extensively in group and solo exhibitions ever since those early years – his first solo exhibition was held at the Pierneef Museum, Pretoria, in 1986.

He is known as a landscape painter, using the genre as an exploration of the transient nature of the South African Karoo and so-called dry landscapes – often depicting the impermanence of man-made structures within them. His solo exhibitions, ‘Huis, Paleis, Pondok…’ 2010, at the University of Stellenbosch gallery, ‘Habitat’ 2011, at Grande Provence in Franschhoek, ‘Hinterland’ at Absa KKNK 2012, Oudtshoorn, and ‘Russtop’ at Aardklop National Arts Festival 2014, Potchefstroom and were testament to this passion for studying the signs of this decay in the South African landscape.

Brahm is also a prolific sculptor, working mainly in bronze and more recently, freeform sculpture in steel exploring the relationship between man and modern means of communication (work in progress – not yet exhibited).

His talent and many years of experience are highly regarded and sought after in the film industry.

Art in the Auditorium
Sculpture on the Cliffs 2022