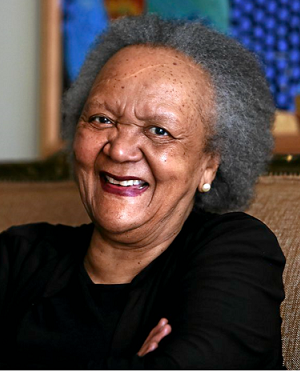 Barbara Masekela is variously described as an activist, academic, educator, poet, politician, ambassador and mother. She is also a poet and has held positions of arts leadership within the African National Congress (ANC).

She served the South African government at the highest level when, after his inauguration as President, at which she presided, Mandela appointed her the first new South African Ambassador to France and UNESCO in 1995. Subsequently, on 8 September 2003, President Mbeki appointed her South Africa’s ambassador to the United States. Between ambassadorial appointments, she served as an executive director for public and corporate affairs for De Beer Consolidated Mines. She served as a trustee of the Nelson Mandela Children’s Fund and the Nelson Mandela Foundation. Masekela also held various executive and non-executive directorships, including director of the Standard Bank of South Africa, the South African Broadcasting Corporation and the International Marketing Council. She was latterly chair of the board of the National State Theatre.